Night of the Furies – Black Hay live in Hoxton 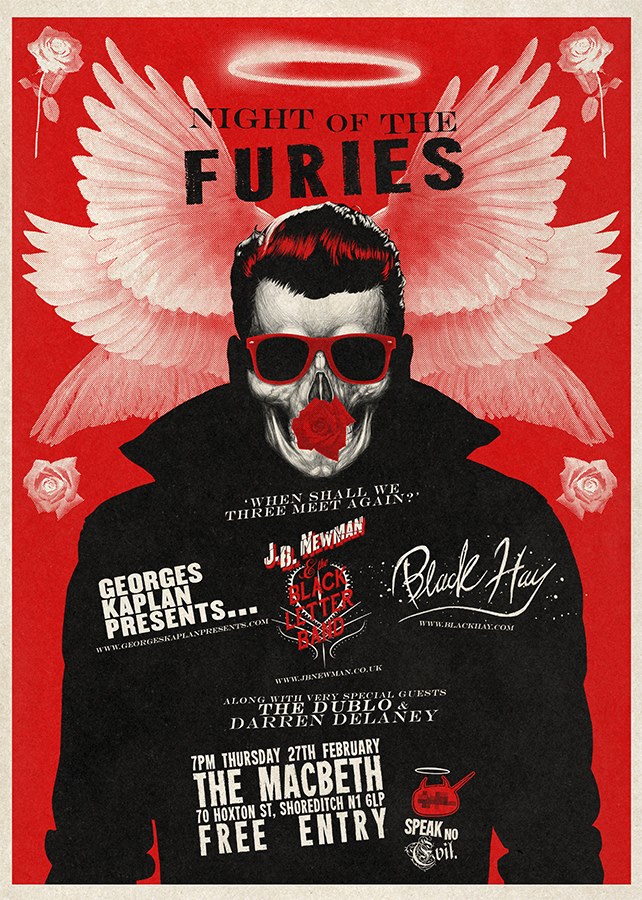 London folks that is. We’re playing this Thursday 27th Febrary at the Macbeth in Hoxton with our friends JB Newman, and Georges Kaplan Presents…

The night is ours quite literally – the event is being organised by our three acts. We’ll also have our mate Darren Delany MCing and doing some magic as well as another band called the Dublo getting in on the action.

We’ve done this kind of thing before, playing with JB and George. They’re kind of our brother bands, and we’re all mates so it has made sense to put on our own shows. We work well together and actually promote the events (unlike some folks wielding that title) and care about the details. We’ve been trying to make it so the night is more than just a bunch of bands playing together, hence having a magician this time, prizes, competitions etc.

Since we’ve started to make a trend of putting nights and all of us playing, we’ve started an event page for all our nights called ‘Speak No Evil‘. I’m presuming it’s named after the Wayne Shorter record but the guys from GKP chose the name so you’ll have to ask them.

And just look at that beautiful poster… Designed and illustrated by a Mr Dan Strange of Think Strange illustrations. A twisted and talented young scoundrel who has also been hard at work on our album artwork, so watch out for that.

If you happen to be a London-based loon, you’ll be hard-pressed to find a better show going on this Thursday night with anywhere near the same level of atmosphere or pheromones. THAT, I can almost guarantee.

Here are some recordings of songs you might be hearing on the night. Of course recordings can only do so much to convey the feeling of being up close in the armpit of the sweating beast.